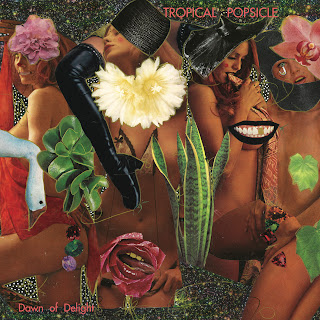 Purchase at Itunes now, and all other major digital retailers soon.

Here you go, ladies and gents.  It's been over two years since Tim Hines handed me the first of the Tropical Popsicle (bandcamp!) recordings he'd been working on, sort of a late-night endeavor he'd been kicking around in his basement studio when he wasn't busy with his main project at that time, Lights On.  Within six months, we released the first Trop Pop 7", "Beach With No Footprints" b/w "Always Awake in Shadows" (buy the limited red repress), and he had a proper band together, playing their first show for the release of that record.  Eventually he released the "Age of Attraction" digital EP, the band was featured in this Urban Outfitters Store on Tour thing, they had a couple of songs in this super popular surf video "Distant Shores", we released their second 7", "Ghost Beacons" b/w "Skulls in the Stars" (limited color vinyl still available), and the band continued to play a number of shows while they put the finishing touches on their debut LP, Dawn of Delight.

Dawn of Delight exists as culmination of two years worth of the band's first material, and we couldn't be prouder.  Talitres Records in Europe will be releasing it in some territories over there, and you can find it from us everywhere else.  Check out the new video for "Ghost Beacons" below, by Moon Room Productions,  as well as the existing video for "The Tethers" and previously available tracks from the LP.

From the press release:
Somewhere in the shadows beneath a consummate sun-drenched pace of life lies hidden occult fantasies that keep you up at night, wherein Tropical Popsicle beckons you into their veiled world. Take the jangly melodies of 60’s garage jams and surf rock inspired by Southern California beaches and cast a psychedelic gloom across the whole coastline; Tropical Popsicle brings the doleful feel of the end of summer, over and over again.


"Beach With No Footprints" on Soundcloud:


"Universe of God Shadow" on Soundcloud:

"View From the Dihedral Wall":


"Distant Shores", featuring "Universe of God Shadow" and "The View from the Dihedral Wall":